TONY MORTIMER – SONGS FROM THE SUITCASE

There’s a song called Out Of The Frame on Songs From The Suitcase – the debut solo album by Tony Mortimer – and on it Mortimer appears to rally against his public image as a teenage rapper in a boy band. “Somebody take the smile and frame down off the wall/Goodbye Mr Yesterday – he won’t be back around at all/And time don’t melt the snow – freeze frame all the lies//Up and down I go insane – set alight the coat of white.” Naturally, it’s about trying to break out of a boy band but when you hear the song, two thoughts jostle for position; firstly, what a marvelous insight it is to imagine those white and furry East 17 coats – from the infamous Stay Another Day video – ablaze in an alternative universe; and secondly, how has Tony Mortimer suddenly managed to sound so good?

The latter thought is reinforced when you hear the rest of Songs From The Suitcase, an album about relationships and growing old together that’s as far removed from teen pop as it’s possible to convene. Indeed, on songs like the instantly memorable Rain In England, a co-write with Julian Lennon, XTC’s Andy Partridge and Marius De Vries and a duet with Julian himself, Hold On, a song about someone falling out of love with you and all the heartbreak that ensues, and End Of The Line, a sparse ballad that somehow counter-intuitively reminds us of Sinead O’Connor’s version of Nothing Compares 2 U, Mortimer has seemingly rewritten the rulebook on his career. And that’s before you hear the heartbreaking All I Got, where you may be reduced to tears: “I may never own no castle/Or mansion by the sea/I can’t afford no champagne life/But I can afford to dream/I’d die to be your hero/How I live to make you see/There is nothing I wouldn’t give you/But all I’ve got is me.” 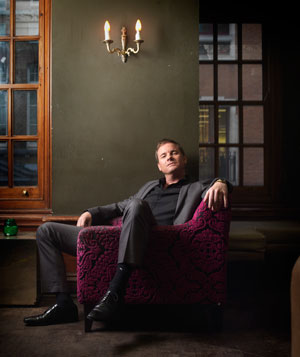 Way back in 1991, thrust blurry-eyed and blinking into the Walthamstow twilight, Tony Mortimer had little idea that his particular brand of rabble-rousing boy-band pop would create such a storm. Indeed, prior to that, a young Mortimer had been on the verge of signing a solo deal with London Records until ex-Pet Shop Boys manager Tom Watkins suggested that what the world needed was a boy-band antidote to Take That and a band that bad girls could fall in love with. The result inevitably became East 17 although what Mortimer says now is that he really thought the world needed a UK version of New Kids On The Block and when you think about it this is not a million miles away from the truth. The ensuing chaos produced a 1992 debut single, House Of Love, which sold 600,000 copies and a debut album that hit the No.1 spot the following year. East 17 went on to achieve 18 Top Twenty hits (including Deep, Steam, Let It Rain, It’s Alright and the epic Christmas No.1 ballad Stay Another Day, the latter remaining No.1 for five weeks and earning Mortimer an Ivor Novello Award) as well as four Top Ten albums and sales of over twenty million records. And when East 17 finally split in 1997 it was heralded (and still remains) one of the greatest break-ups in pop history.

Much has been written about Mortimer’s career to date although most of it documents a time when he was much younger and “writing songs about fornication!” These days he’s likely to say he was “an extremely emotional teenager” and that “when you write in your bedroom you have no idea that it’s going to be played on every radio station and your mum’s going to hear it.” It’s interesting to note now, however, that songs like Deep which appeared to be as sexually explicit as you can get, actually hinted at a more covert intimacy, specifically, depth and meaning. For the record, Mortimer also now maintains: “I don’t want to change the world anymore and I am happier now than I ever have been. I had a very early mid-life crisis and those crazy days seem so long ago. When you grow up, you also find out that the things that make you happy are walking in the woods with the woman you love.”

Mortimer signed to FOD Records in 2012 and Songs From The Suitcase – incidentally the title comes from the fact that Mortimer carries around hundreds of his songs in a suitcase – doesn’t feature any woods but it does feature several songs about the woman Mortimer has been in love with for almost 25 years. Mortimer says that he wanted to write about families and relationships and about the possibilities of love and losing that love. The epic pop tune All I Need, the carefree Graceland-esque Long Blow The Wind and the Motown-tinged Shake It Down may be capable of explaining themselves but there are darker forces at work on the rest of the record: the aforementioned End Of The Line was inspired by the line “We both know I’m not what you need” in Dolly Parton’s I Will 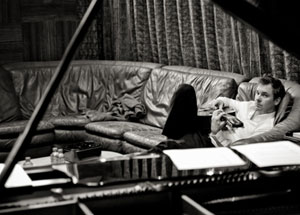 Always Love You and conjures up its own warped destiny – “I guess it’s just the end of the line/Nobody’s fault, no one to blame/I guess I’m not what you had in mind/And over time we simply changed”; Jus’ Fine was inspired by Bon Jovi’s Living On A Prayer but ends up sounding like Joan Armatrading (no, really!); and Leaves Of Autumn ostensibly about a man getting rid of all the leaves on his lawn only to find one errant leaf has blown into the middle of it, turns out to be a terrific metaphor for a damaged relationship -“How I hate those first leaves of autumn/Helpless as I watch them gently fall/Remembering the laughter in the sunshine/Only if I could I’d catch them all.” Of course, there’s an elephant in the room and that elephant proves to be a song called Underdog. Undoubtedly the bastard son of Peter Gabriel’s Sledgehammer, The Beatles I Am The Walrus and David Bowie’s Scary Monsters (and Super Creeps), Underdog suggests that there’s still something unashamedly bad boy indie about Tony Mortimer and “like a diamond” you can’t cut him down. The song is about ‘believing in yourself and kicking the door down” and its veritable wall of sound is surely the most shocking thing about Songs From The Suitcase.

Produced by the legendary Bob Rose at ICP Studios in Brussels, Songs From The Suitcase features extensive backing vocals by Julian Lennon and the track he and Mortimer duet together – Lennon and Mortimer anyone! – called Rain In England is potentially a career highlight for both of them, sounding not unlike something off Roy Orbison’s iconic Mystery Girl album: “You will find me/Lost inside me,/Still holding on, to dreams I’ve left behind/I can hear the rain in England, falling softly, to the ground/And, I can see the hills of England, rolling gently, homeward bound.” Naturally, the song is about missing England but it could just as easily be a song about Mortimer himself, about a man who has finally stepped in from a wilderness. “Somebody hear me out/Help me out of the frame?” When you hear Songs From The Suitcase you know you just have.